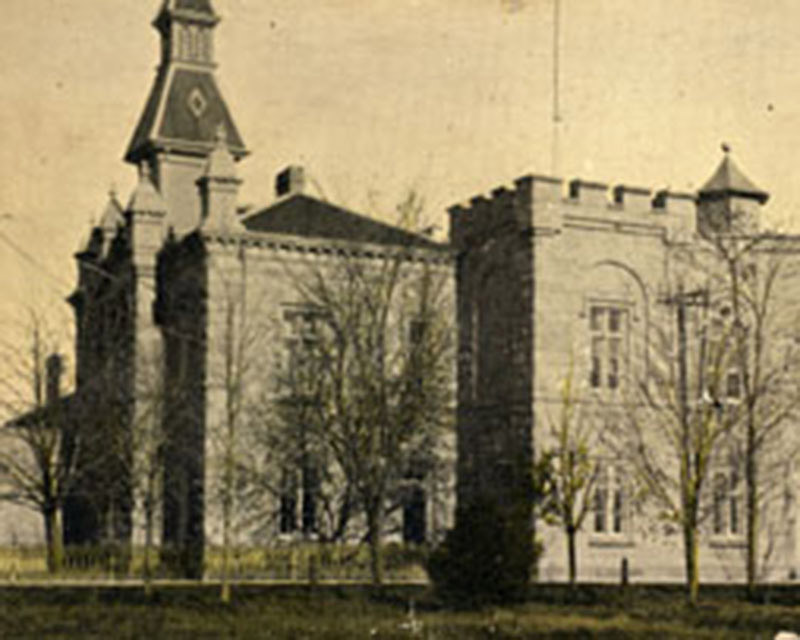 Town Hall (County Court House): The stone structure was built in 1855 as Halon County Courthouse on land donated by Hugh Foster. Milton was legislated as the seat of County Government in 1853 and this County Court House, with its castellated design, was completed in 1855. Its fortified appearances with intended to suggest the strength of the law. The massive, rough face blocks of stone were quarried from the near by Niagara Escarpment and the contractor was paid £2,975 for construction. In 1877, the north section was added to accommodate the larger jail as well as the jail wall. All trials in Halton County were held here and three resulted in hangings. On November 30, 1858, Thomas Corner was hanged publicly for the murder of two women. The hanging was attended by people from all over the county. In June 1862, Edward Keenan was hanged publicly for murdering his mother. In January 1883, Michael O’Rourke was hanged for murdering an old man and his daughter. This was not a public hanging and took place within the jail walls. The town of Milton purchased the building from Halton Region for $1 and, in 1985, after a $3 million restoration, it became the new Town Hall. A new 2-storey addition was added on the east side of the building in 2009.